Precious or semiprecious stones, based on origin:

Another important feature is that they are seen as beautiful. The International Trade Organization CIBJO counts the following as gemstones:

In addition to genuine gemstones, there are of course imitations or synthetic gemstones.

Gems are made of minerals, glass melts, rocks, fossils and substances of organic origin. They are valued for their beauty and used in jewelry.

Precious stones are rare, have a Mohs hardness of over 7 and are transparent (therefore, capable of transmitting electromagnetic waves). However, the two terms (synthetic) gem and precious gem are used interchangeably. By this definition, the Ruby, the Diamond or the Emerald are also gems.

Gemstones, which may well be beautiful, though commonly found, were formerly called semiprecious stones. In Gemology and Mineralogy this term is considered obsolete since the term “semiprecious” cannot be properly defined and suggests that these gemstones are inferior but that is not the case. 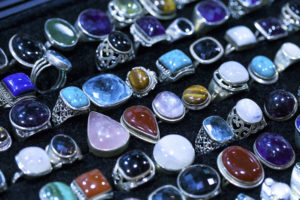 Also, the following physical distinctions may be revealing:

What types of gems are there?

To answer this question, gemstones can be differentiated mainly into species or mineral classes. The value of the stones also depends on other factors such as the color, the shape or cut and the size or weight (carat). The precious jewels can be subdivided into 10 mineral classes or species.

Gems are distinguished by their chemical composition and the structure of the crystal lattice into the following 10 mineral classes or species: 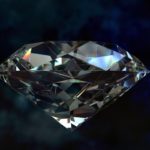 If a gem is composed of just one element, it belongs to the first mineral class. For example, the diamond is made of only carbon and is therefore considered a natural element.

Sulfides consist of one element and sulfur. For example, the pyrite consists of sulfur and iron.

Halides consist of an element with fluorine or chlorine. Fluorite, for example, consists of fluorine and calcium, while halite is composed of chlorine and sodium. 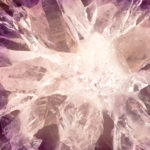 Oxides consist of one element and oxygen. For example, quartz crystals are composed of silicon and oxygen. Hematite, on the other hand, consists of oxygen and iron.

Carbonates consist of a carbonated element (carbonates). For example, Malachite is composed of carbonic acid and copper, Rhodochrosite consists of manganese and carbonate (carbon dioxide).

There are about 160 known borate minerals, divided into 5 classes that are all boric acid salts. Borates are rare and can be found almost exclusively in salt lakes.

This class includes about 450 minerals or salts of:

This group contains about 980 minerals, which are common to the acid radical H 3 XO 4 (X stands for arsenic, phosphorus, vanadium).

Here, only Apatite is rock-forming – the other minerals are found only in very small quantities. 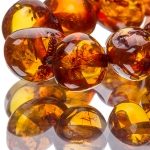 There are about 70 known minerals that are included in this mineral class. Amber would be the best-known representative but is not considered an independent mineral recognized by the IMA (International Mineralogical Association). Amber is, however, still listed in mineral systems among the organic minerals.

Find more information in our guides: