Sapphire is a variety of the mineral Corundum, which is very hard with a Mohs hardness of 9, making the Sapphire the second hardest gem after the Diamond.

Today the term Sapphire refers to all blue varieties of the Corundum group, ranging from a bright sky-blue, to an intense royal blue, to a deep midnight blue. The color may vary depending on the light effects and cut of the gem. Sapphires are usually translucent, or transparent, but may also be opaque and cloudy.

The name Sapphire comes from ancient Greek σάπφειρος, which probably in turn comes from the Sanskrit (shanipriya / शनिप्रिय). The word comprises the two words Shani (for Saturn) and Priya (for loved ones). Therefore, some linguists assume that Sapphire can also be translated as “worshiped by Saturn”. 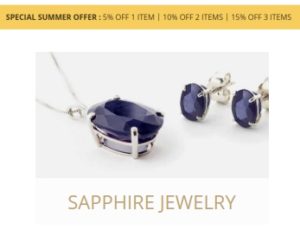 Sapphire or Safir; From ancient Greek σάπφειρος (sapfiros); this probably comes from the Aramaic Saphira (the beautiful) or the Hebrew סַפִּיר (sappir). This may come from shanipriya / शनिप्रिय (Sanskrit).

Sapphires are blue – from sky blue, to royal blue, to dark blue, or almost black. They are either opaque or transparent. Depending on the interpretation, however, Sapphires can also be colored gems.

High-quality, transparent Sapphires with few inclusions usually have a faceted cut. The opaque varieties and also those with a star-shaped inclusions are especially good in a cabochon cut.

The value and price of Sapphires can vary. Only slightly cut, especially those in cabochon cut, are quite cheap. The next price level is the Star Sapphire, with its star-shaped inclusions. If a blue Sapphire is heat-treated, the price depends above all on the purity and color.

Further information on the quality factors of gemstones

As stated before, only the blue Corundum are Sapphires. In the broadest sense, however, all colored and colorless varieties, except the red Ruby can be Sapphires. If elements such as iron, titanium or chrome are added, shades such as orange, red, violet, green or blue can occur. But there are also Sapphires that change color.

The Sapphire governs the star signs Taurus, Aquarius and Pisces. Virgo and Sagittarius, however, are traditionally also assigned the Sapphire.

Which birthstone suits your zodiac?