The word Ruby comes from Latin and means red. No wonder the term ruby ​​red is common, especially as the gemstone color is so exquisitely intense.

For centuries the Ruby has been among the most expensive and desirable gems. Even the ancient Greeks, Romans and Egyptians used this gemstone. So too in India, ancient civilizations used Rubies as talismans over 2000 years ago. Indeed, it is even mentioned in the Old Testament.

Red (dark red to pale red). Rubies contain aluminum, oxygen and chromium. Interestingly, while chrome usually results in a green color, in this gemstone, the chromium ions occupy the aluminum ion sites and this leads to the ruby ​​red color.

The Ruby ​​is the red variety of the mineral corundum and with a Mohs hardness of 9, it is the second hardest material after the Diamond.

The cabochon and faceted cuts are common. Actually, if the stone is clear and doesn’t have inclusions, the Faceted cut brings the gem out optimally. If the gemstone has an optical effect (for example, inclusions of rutile), jewelers prefer a Cabochon cut. The gem is popular in oval, heart-shaped and octagonal form.

Generally, the value of gemstones depends on factors such as purity, color, cut, and weight or carats (ct). 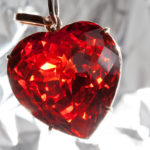 Find out more about the quality features of gemstones.

Rubies are only red varieties of Corundum (dark red to pale red). Other Corundums, such as the pink or blue ones, are called Sapphires.

Did you know that the only difference between the Ruby ​​and the Sapphire is the color? The Ruby ​​contains the same traces of chrome that give it its rich red color. However, titanium and iron inclusions in Sapphires give you a blue gem. 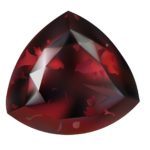 Terms like Adelaide Ruby, American Ruby, Balas Ruby, Cape Ruby, Mont Blanc Ruby, Bohemian Ruby or Siberian Ruby are misleading. These are not Rubies, but other gems such as the Garnet or Rose Quartz.

Depending on the tradition, the Ruby ​​is assigned the star sign Capricorn and Leo. In the 15th to 20th centuries, it governed the month of  December, and later on, July.

Above all, the gemstone is supposed to bring a long, fulfilling life. It is perceived as a particularly strong healing stone and stands for vitality, dynamism, activity, vitality, determination, warmth, dedication, passion, sensuality and of course, also for love.

Which birthstone suits your zodiac?

Even crystal healers like to use Rubies because they are supposed to have a particularly strong energy. The Ruby works its healing powers on body and mind. It is also common to put a Ruby ​​under your pillow so that you remember your dreams more clearly.

The Ruby is an almost universal symbol for passion, romance and love. Additionally, it is associated with chivalry, vitality and sensuality, not only because of its fiery red color, but also due to its durability. The Ruby is, after all, the second hardest material after diamonds, epitomizing eternal love. It is a life-long, if not eternal gift.